Risk assessment of all known alien species in Norway, using a new semi-quantitative methodology suitable for all taxonomic groups and habitats

The risk assessments are done using a newly developed method, which is based on quantitative rather than qualitative criteria. The method estimates the species’ probability to establish and disperse (that is, the invasion potential of the species) and its effect on the indigenous species and nature. The set of criteria may be used on all species groups and is independent of geographical region. The set of criteria consists of 9 criteria, where 3 determine the invasion potential and 6 determine the ecological effect. All criteria are used for all species, and from this, the species are placed in one out of five categories: severe impact (SE), high impact (HI), potentially high impact (PH), low impact (LO) or no known impact (NK). The two categories which indicate highest risk – SE and HI – constitute the 2012 Norwegian Black List.

A selected number of potential door-knockers are also risk-assessed using the same method.

There is a strong need for an international set of criteria for risk-assessment of alien species, and The Norwegian Biodiversity Information Centre hopes that the method developed here may be of assistance in this regard. In addition there is a need for more focus on lack of knowledge regarding alien species in Norway. 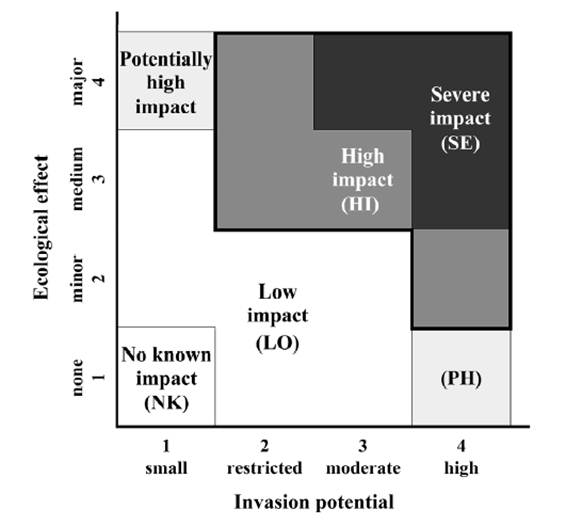